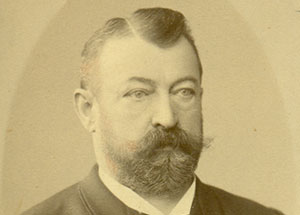 The last of this family was Caspar Kropff who was the sole owner of and shareholder in the company.

He was affectionately called the "Works Father" in Olsberg. At this time, the company was called the "Caspar Kropff Hütte".

Caspar took a decision that to this day has remained important to the company, i.e. to commence production of portable pan furnaces and stoves.

Olsberg is therefore one of the oldest manufacturers of single-room fireplaces in the world.

But Caspar wasn't only a businessman, he also dedicated himself in various ways to public life.