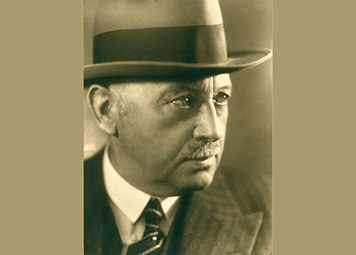 In 1921 Hermann Everken decided to join the company as the director.

At the time, Hermann Everken had been employed as an engineer at Krupp in Essen for 25 years. Here, he held the position of manager for all the group's foundry operations and would have continued to enjoy a great career in Essen if he had not decided to reject all offers to stay there so that he could dedicate himself entirely to his work in Olsberg.

By now the company had become outdated. The buildings and machines were in poor condition and the furnaces and the enamelling works were about to collapse.

These measures and the newly acquired performance capacities enabled the company to weather Germany's inflation crisis of the 1920s without suffering further economic loss.

Production during this time was concentrated on foundry components for pan furnaces. Olsberger Hütte was the largest manufacturer of pan furnaces and immersion vessels ((??)) in Europe.

After the Olsberger Hütte was converted into a limited partnership in 1939, Hermann Everken became the personally liable partner until the end of 1945.

Production was initially ceased at the end of World War II and, from the beginning of 1946 to June 1950, it came under the control of the British military authorities.